There’s a lot more to Estonia’s capital than cheap beer. The 1,000-year-old city has a modern vibe, with architecture, museums and cafes to match.

Tallinn, one of Europe’s newest capitals, boasts a rich mix of architecture and culture in a small geographic area. Its Old Town was almost untouched by war and remains perfectly preserved. And outside the city walls there are beguiling districts of brightly painted wooden houses, parks, redeveloped docks, beaches and forests.

The city has a surprisingly modern, sophisticated air: trams and buses (free for the locals) make everything easily accessible and old warehouses are being converted into new spaces for business and culture. Free wifi and a nascent tech scene (Skype was developed here) show this is a city looking forward as well as to its traditional, folkloric roots. 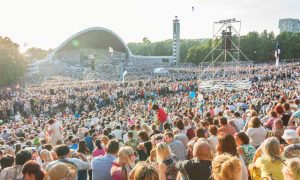 Every five years (the next one is in July 2019) Tallinn has its Last Night of the Proms moment as 30,000-odd singers from 1,000 choirs belt out traditional anthems to the white, blue and black flag-waving masses who gather for the Song Festival, which began in 1869 and has developed into one of Estonia’s key cultural get-togethers. The sprawling grassy bowl is the perfect place for a Sunday stroll, while the huge shell-like structure on which the singers stand is a modernist treat designed in 1959 by Alar Kotli. A previous stage stood on the site from the 1920s but the one that soars over the park today was built to accommodate the vast numbers of singers and spectators who flock to the event – and its popularity, which mirrors feelings of “Estonian-ism” in the country continues to rise. The stories in the songs and the use of the Estonian language to sing them reach deep into the heart of the Estonian soul and collective culture.
• visitestonia.com/en/tallinns-song-festival-grounds-11 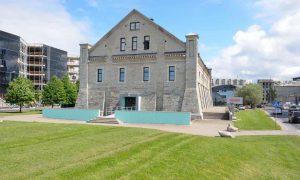 This is the perfect place to start exploring the Rotermann Quarter – a former industrial district that’s being turned into shops, offices and flats. This chunky old salt warehouse at the heart of the neighbourhood houses the museum and is chocka with models of the most interesting buildings in town, such as 23 Roosikrantsi Street by Robert Natuse – an expressionist gem built of dark bricks and with a pointed prow that recalls the Chilehaus in Hamburg, plus a model of a huge planned seaside sanatorium in Estonia’s coastal city, Parnu, which was never built. There are fascinating hand-drawn plans (mostly from the Soviet era) for overblown reconstructions of Tallinn city centre, crowned with towerblocks and megastructures. Again the plans never came to fruition because of the sums involved, and a sense that the history of the city was worth preserving. However, there are some big bits of bluster from the communist age around Tallinn – like the Viru Hotel’s skyscraper slab and the Linnahall, an evocative, crumbling wreck destined to be transformed into a concert venue and conference centre.
• arhitektuurimuuseum.ee 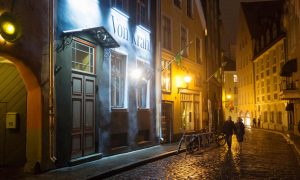 A handsome traditional stone pub and theatre in Tallinn’s Old Town, where buildings jostle against the hillside, Von Krahl is all steep steps and characterful wooden beams on a street (Rataskaevu) that dates back to the 1700s. The team behind it took over the place in 1992 as Communism ended and free expression widened in Tallinn. Today, all kinds of left-field plays are put on here and one of the most recent was titled Hipsteri Surm, which translates as “Hipster Death”. Bands stop off too. Hundreds jammed in during Tallinn Music Week (see above) last year to see Estonian neo-folk trio Trad.Attack!, who sample one of their member’s late granny’s vocals on upbeat, dancey tracks.
• vonkrahl.ee 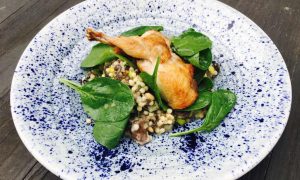 With its mid-century furniture and local artists’ paintings on the wall, Umami is cool – yet far removed from the showiness those places often suffer from. This is the second restaurant from Janno Lepik and Kristjan Peäske; the first is Leib, in the old town. Warm staff, an open kitchen and a family-friendly vibe go alongside food such as local cod and salads with rocket and beetroot. Umami is inside an old house on the edge of a park in the Mustamae district, which – along with the laid-back atmosphere – makes it feel more like you’re going to someone’s for dinner than out to a restaurant.
• +372 600 1035, umamiresto.ee 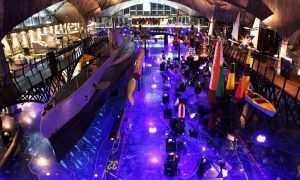 If visiting a seaplane hangar sounds boring, stick with us – this 100-year-old concrete behemoth is cavernous, and miraculously has no supports inside. It was put up to house seaplanes for the Tsar’s navy in 1916 and has survived a century’s tumult in Tallinn. In its new iteration as a museum (opened in 2012 after the threatened hangar was saved and restored), the planes are back. They date from the first world war, and there are boats and submarines from the 1930s to the 1990s. The punchy lighting, huge fans and dramatic walkways inside make it look more like a nightclub, which it sometimes is.
• lennusadam.ee 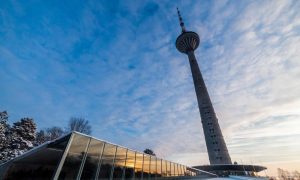 One of the best things about a trip to the Teletorn (TV Tower) is the bus ride out through the bottle green pine forests that fringe Tallinn. The tower is a classic of Soviet design – raw concrete reaching for the sky and screaming about how technologically advanced the socialist society was in the 1970s (despite some indicators to the contrary). At the top you can be buffeted by the breeze on an outdoor platform – and even peer over the Baltic to Finland on a clear day.
• teletorn.ee 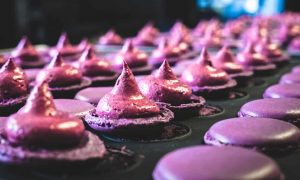 The fascinating district of Kalamaja is worth a walk. Just get off the tram at the Balti Jaam stop and head north, away from the Old Town, where you’ll find streets that look as if they’ve been airlifted in from Reykjavik – homes made from corrugated iron and wooden slats painted yellow, cream and blue. In the midst of the area several cafes keep locals happy, such as Levier. The outdoor tables are the ones to grab, and there’s a big nod towards France: macarons and elegant patisserie are stacked up by the counter.
• levier.ee 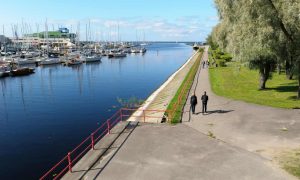 For an easy day out, take the 34 bus from Viru Square to the pleasant coastal suburb of Pirita, to the east of Tallinn. There are sweeping views of the city’s harbour and skyline from its pretty promenade and long, sandy beach. Men fish in the Pirita river where it enters the Baltic, and this is the site of the Olympic Village, accommodation for sailing teams during the Moscow 1980 Olympics (the complex is now a spa hotel). The Russian influence is obvious on the waterfront Maarjamäe war memorial, designed by Allan Murdmaa and Matti Varik in 1975, with its concrete sculptures commemorating fallen Red Army soldiers. 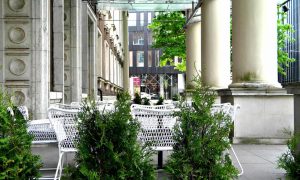 This attractive old theatre has a wonderful art deco cafe with dark colours and a classy vibe reflecting Estonia’s golden age in the 1920s and 30s, when it was an independent nation expressing itself artistically with the new styles of the age. It’s a perfect embodiment of the elegance and restraint of the city and was the venue Estonia’s music-mad former president Toomas Hendrik Ilves chose to DJ at during last year’s Tallinn Music Week. He played tracks from his charity mix album Teenage Wasteland by MC5, The Who, New York Dolls and David Bowie.
• no99.ee/cafe 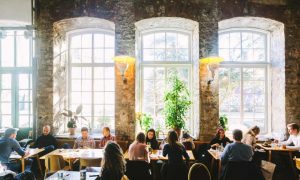 Telliskivi Loomelinnak or just “Telliskivi” as locals say (the other bit means “creative city”) is a fascinating collection of old railway buildings (though those same locals posit that there was actually secret military manufacture going on here, too) near Tallinn’s main station. Today’s it’s home to creatives’ studios, nightclubs, a cycle shop that doubles as a bar (jooks.cc). One of the first businesses to move here was little restaurant F Hoone, which has a relaxed vibe, bare brick walls, traditonal Estonian grub, and a helpful map of Tallinn printed across the floor.

Published by “The Guardian “