From June 27 through July 3, Estonians from across the world came together to celebrate their Estonian culture and identity at the 12th ESTO festival. ESTO 2019, dedicated to the theme “Our Future,” took place immediately prior to the XXVII Song and XX Dance Festival, beginning in Helsinki and moving through Tartu before concluding in Tallinn. Toronto Estonian Juku Gold takes a look back at the festival through the eyes of a youth delegate.

The ESTO tradition began in 1972 in Toronto, when approximately 20,000 Estonians living in exile around the world came together to celebrate their shared identity, culture, and language. Since then, ESTO festivals have occurred across the world roughly every four years, continuing even after Estonia regained independence in 1991.

Perhaps most special about this year’s ESTO festival was its youth program, which brought together more than 60 young Estonians from more than 25 different countries across the globe. Estonians in their teens and early twenties from various countries were able to apply as candidates, or be selected by their communities, to be ESTO 2019 Youth Delegates.

The youth program was designed to follow several underlying themes designed to foster group debate and to be discussed throughout activities in Helsinki, Tartu and Tallinn. The themes focused on Estonian identity, culture, language, youth, living abroad, returning to live in Estonia, how to stay connected (including via internet), and more.

In Helsinki, youth delegates were introduced to Estonian history and society in Finland.

We attended lectures on Finnish-Estonian relations and history at the Helsinki Estonian House, and learned more from Estonian Ambassador to Finland Harri Tiido and his staff at the Estonian Embassy. A comprehensive seminar on youth and the future was held at Helsinki Central Library Oodi, where we and the public learned about the successes and challenges of the 72,000-strong Estonian community in Finland.

Youth delegates engaged in discussion among ourselves and with guest speakers, including Minister of Population Riina Solman (Isamaa) and Finnish entrepreneur Peter Vesterbacka, who is leading the project to build an undersea tunnel between Helsinki and Tallinn.

From Helsinki to Tallinn, we youth delegates joined hundreds of other global Estonians aboard the MS Silja Europa for the official ESTO 2019 opening party. This included an Estdocs film program, a folk dance program, and dancing throughout the night kicked off by Estonian pop star Ott Lepland.

Following the night’s festivities aboard the Silja, the youth delegates headed to Tartu. On our first day there, we learned about opportunities offered by Estonian universities, cruised on the Emajõgi River, sang together at ESTO Song in Tartu’s Town Hall Square, met with Tartu Mayor Urmas Klaas (Reform), and reveled in song, dance, history and culture throughout the night.

Most importantly, we convened at the University of Tartu Museum to hold our Youth Congress (link to Youtube), during which we discussed and debated the aforementioned ESTO themes, sharing both personal experiences as well as those of our respective Estonian communities abroad.

Our second day in Tartu was spent mostly at the new Estonian National Museum (ERM), where we toured the museum’s exhibits, including a special ESTO exhibit curated jointly by ERM and the Toronto-based Museum of Estonians Abroad (VEMU). We also spent several hours in working groups aimed at creating consensus and proposals related to the ESTO discussion themes. 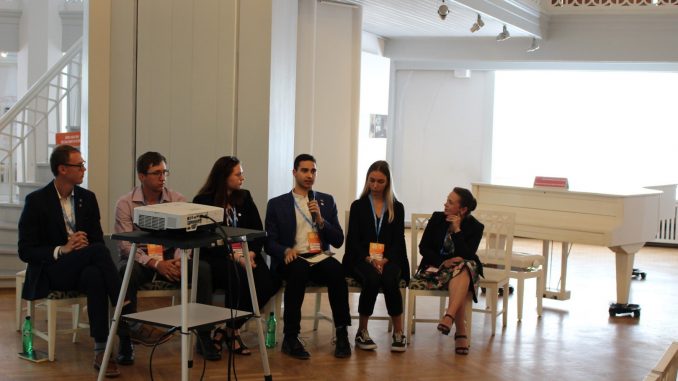 That evening, we attended a special performance of the play “LA H US” (“Separated”), a powerful production about Estonians abroad and at home set in the archives of Toronto’s Tartu College. It was Toronto Estonian Kaja Telmet’s idea to commission the play from Estonia’s Rakvere Theatre, which produced it with support from VEMU. Later on, we also had the opportunity to tour the houses of and learn about some Estonian fraternities.

On July 1, ESTO moved to its final destination: Tallinn. There, we youth delegates had a meeting at the Estonian Academy of Sciences, after which we moved on to a conference at Telliskivi Creative City where various global Estonian community representatives spoke about topics such as the teaching of the Estonian language abroad, youth camps and exchanges, and Estonian Houses and clubs abroad. This was followed by a performance of the play “Üks väike tuba” (“One Small Room”), which tells the story of 100 years of Estonian history through a single room, its inhabitants and various changes throughout the century.

The night was capped off with a massive party to celebrate Canada Day, complete with road hockey, Canadian music, and several hundred attendees. Beer ran out more than once during the night.

July 2 featured the National Congress (Rahvuskongress) of the Estonian World Council (ÜEKN), one of ESTO’s most important elements ⁠— and held in Estonia for the first time ever. The goal of the congress is to discuss issues affecting global Estonians, along with current relevant and political topics.

President Kersti Kaljulaid delivered the keynote address (link to Youtube), in which she stressed that Estonians abroad are always welcome in Estonia, and that Estonians are Estonians, regardless of where they may live. Other notable speakers included Minister of Foreign Affairs Urmas Reinsalu (Isamaa), MP Keit Pentus-Rosimannus (Reform) and Minister of Population Riina Solman (Isamaa).

Two panel discussions took place during the congress featuring various thought leaders and cultural figures. In a testament to the importance of the youth, each panel featured one youth delegate: I spoke at the morning session, and Karl Grabbi, from the U.S., spoke at the afternoon session. The audience also included several esteemed guests, including former President Arnold Rüütel, who stayed for the entire day.

Of particular note was a late afternoon presentation by ESTO Youth Programme organizer Tuuli-Emily Liivat, wiho presented the ESTO Global Youth Declaration (link to Youtube), a culmination of the youth program’s discussions and deliberations. The declaration, currently a working draft, outlines findings and recommendations regarding global Estonian youth and its future development. The declaration also proposes the creation of a global youth network for Estonians, emphasizing the importance of staying connected, and of the younger generation in preserving the Estonian language and culture. The day after the National Congress, we attended a moving memorial ceremony at the newly built Victims of Communism Memorial in Tallinn’s Maarjamäe neighborhood. The ceremony featured stories from survivors of the first and second Soviet occupations who had fled abroad, along with speeches by Archbishop of the Estonian Evangelical Lutheran Church (EELK) Urmas Viilma and Minister of Justice Raivo Aeg (Isamaa).

We then moved on to the Estonian History Museum, where representatives of the Ministry of Culture, including Minister of Culture Tõnis Lukas (Isamaa), hosted a conference titled “Estonia’s Impact on the World.”

ESTO 2019 formally concluded on July 3 with an elegant ball held at Tallinn’s Seaplane Harbour, but the program continued the following day with a tour of Patarei Prison — soon to be the site of the world’s first International Museum for the Victims of Communism — followed by a reception at Tallinn City Hall.

As Minister Solman said in one of her addresses to us (link in Estonian), the Estonian government wants to create conditions ensuring “that the Estonian communityliving abroad will have the confidence to continue its valuable work as goodwill ambassadors of Estonia.”

If there is one thing that the ESTO youth program accomplished, it is that it has taken 60-something young, bright and enthusiastic Estonians from across the world and emboldened us, empowered us and given us a new network through which to come together to further the words written in the Preamble of the Constitution of the Republic of Estonia: the preservation of the Estonian people, the Estonian language and the Estonian culture through the ages.