Kai Art Center opened in a former submarine factory in Tallinn’s Noblessneri sadam (Port Noblessner) on Friday. The new center will be the first permanent home for Estonian contemporary art.

A week before the official opening, ERR News went to speak to center director Karin Laansoo about what Kai will offer to artists, the public, and why the redevelopment of the area is “like reclaiming a piece of Tallinn.”

The idea for Kai was born three years ago when Laansoo, director of the Estonian Contemporary Art Development Centre, and other members of the organisation started thinking about what the future should hold for Estonian contemporary art.

The center’s goal is to promote Estonian art internationally and support artists with fundraising, legal, and communications advice. But it was nomadic, moving to wherever it was needed, from New York, to London, Basel or Milan. Laansoo, who has experience as a curator, gallery owner, and has managed artists residency programs, was based in the U.S.

“We came to the conclusion that a home base would really benefit the local art scene mainly to build up the infrastructure,” Laansoo said. The organization applied for a grant from Enterprise Estonia and got lucky. They will now offer the same services to artists, but from a permanent base in Tallinn. 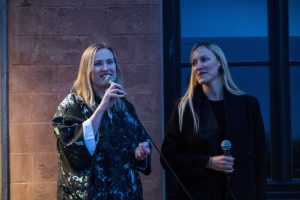 The center will host residency programs for Estonian and international artists and has several exhibition spaces. It will also include a movie theater, as well as four restaurants and a speakeasy on the ground floor.

“I’ve been based in the states for the last 12 years, but when I compare New York and Tallinn, Tallinn is more exciting,” Laansoo said, speaking about Estonia’s contemporary art scene and its artists. “Of course, everyone wants to be in New York and show there and be visible, but it’s so great to work in Estonia. We have such a close-knit community of artists, colleagues, and friends who are taking care of each other. When we talk about the artists and what they do, the quality is very high. We are not talking about large numbers of artists, but the work is amazing.”

Laansoo said the community also had a reputation abroad for being close-knit.

“We are known as a strong community with a very innovative approach to coworking,” she said. “Every time we work with someone from outside Estonia, they are blown away by how supportive we are of each other. It’s very close-knit and experimental when it comes to ways of working together. I think no one has a lot of money, so you just have to make the best of it and find creative solutions for how to do and say what you want to say and do.”

Even before it had opened, Kai had gained a good reputation internationally and has been attracting artists from around the world, Lansoo said.

“When you are nomadic, you become a magnet for projects, but people say, ‘Let’s meet in New York or London.’ But now we are in Tallinn, I can see what a magnet we are becoming. Kai is bringing people here, not just for the opening but for everything after that. When we launched the residency program in July, we got over 300 applications from over 60 countries. And we only had 15 spots.” 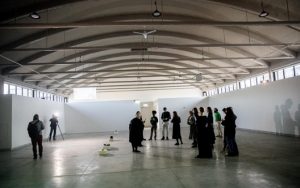 Residencies will last between two and four weeks, and there will be about 12 per year. The first call was for artists, curators, writers, and researchers. It is the first residency program in Tallinn, she said, adding that because the building and its location has such an interesting history, the atmosphere is unique.

From submarines to art

Kai is housed in a former submarine factory in Põhja-Tallinn’s Noblessner sadam. The area is named after the founders of the harbor, who were related to the Swedish Nobel family of Nobel Peace Prize fame.

Built more than a century ago, when Estonia was part of Tsarist Russia, only 12 submarines were ever built at the facility when production was halted by the outbreak of World War I. During the Soviet occupation, the area was used for shipbuilding and closed to the public as a military area.

Laansoo says for anyone that has lived in the city for a long time, the redevelopment of the area is “like reclaiming a piece of Tallinn.”

“Now it’s just amazing to watch people be here, and they seem so happy to be here,” she added.

The Kai Art Center’s first exhibition will be the third international exhibition of the Tallinn Photomonth contemporary art biennial, which has been curated by Hanna Laura Kaljo.

Laansoo said she was “very proud” that this was the first exhibition, and that it was very creative and original.

An opening exhibition by American artist Raphaele Shirley also took place at the port at 7:28 p.m. on Friday.

Speaking about the opening of Kai, she said: “I’m very excited. We didn’t know how to renovate a building, so it was a huge learning curve, and with the added bonus of having a heritage protected building. There are so many details, and planning, and so much energy went into this building. I am so excited to see it finally open, and finally ready to see people in here. People are in for a treat.”

The Kai Art Center is located in Tallinn’s Noblessner sadam at Peetri 12. 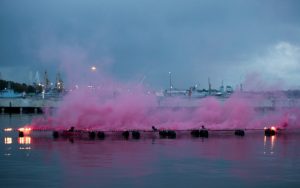